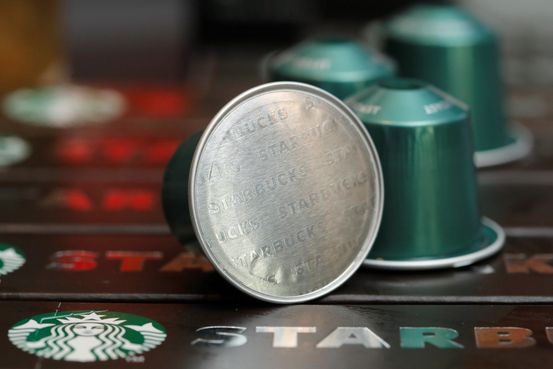 The world’s biggest packaged-food company on Thursday reported a 7.7% rise in first-quarter organic sales, which strip out currency fluctuations, acquisitions and divestitures, driven by strong demand for Nespresso pods, Nescafé instant coffee and

When the pandemic hit last year, consumers bought whatever coffee they could find as offices closed around the world and they faced shortages at supermarkets. But after months of restrictions, coffee drinkers have invested in espresso machines, French presses and pour-over brewers as they look to upgrade their coffee experience and replicate what they were getting in cafes at home.

“We clearly benefited from people enjoying their coffee at home rather than in the office or the cafeteria,” a Nestlé spokesman said.

The Swiss company has made coffee a priority in recent years as part of an overhaul to focus on product categories that it says have the strongest growth potential, while selling noncore businesses like U.S. confectionary.

In one of its biggest moves, Nestlé in 2018 agreed to pay Starbucks Corp. more than $7 billion for the rights to sell the Seattle chain’s packaged coffee beans, single-serve coffee packs and other products through retail and grocery stores. It has also gone after young and hip coffee drinkers by acquiring smaller brands, including Austin, Texas-based Chameleon Cold-Brew.

Last month the company said it would invest in the expansion of its Nespresso production and distribution centers in Switzerland to meet growing consumer demand world-wide.

Nestlé’s challenge now, some analysts said, is seeing whether it can keep its pandemic momentum going as some major markets, like the U.S. and U.K., begin to emerge from the crisis.

In coffee, the company is rolling out new touchless machines to offer safer cups for workers returning to offices, while trying to retain the boom in at-home consumption with a range of new products and flavors.

an analyst at RBC, said that while he thought the Nespresso numbers were impressive, he didn’t think it was the start of a long-term trend.

“That growth isn’t sustainable for them,” he said.

Still, Nestlé has performed well over the past year as consumers stuck at home splurged on familiar foods from big brands for them and their pets.

In the first quarter, the maker of Nesquik cereal, Friskies cat food and Häagen-Dazs ice cream posted strong sales in dairy products, led by demand for home baking products and fortified milk, as well as pet care, which has been on a tear over the past year.

E-commerce was another bright spot, with sales, fueled by Nespresso products, rising 40% to reach one-sixth of group sales.

Nestlé also flagged signs of recovery in its out-of-home business, selling to places like restaurants and hotels, as pandemic restrictions ease in some parts of the world. China was its best selling region in the quarter.

Write to Nick Kostov at Nick.Kostov@wsj.com

A Mother’s Day Gift Guide to Indulge her Hobbies

A Mother’s Day Gift Guide to Indulge her Hobbies