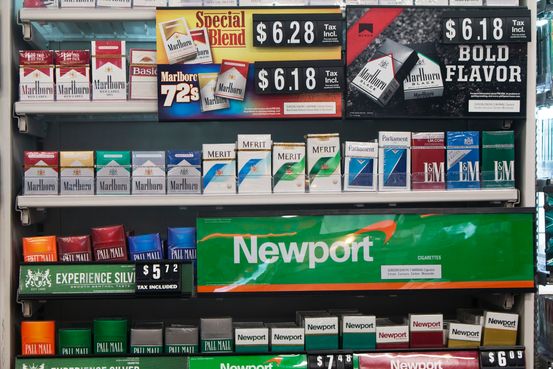 The Biden administration is considering requiring tobacco companies to lower the nicotine in all cigarettes sold in the U.S. to levels at which they are no longer addictive, according to people familiar with the matter.

Administration officials are considering the policy as they approach a deadline for declaring the administration’s intentions on another tobacco question: whether or not to ban menthol cigarettes.

The Food and Drug Administration must respond in court by April 29 to a citizens’ petition to ban menthols by disclosing whether the agency intends to pursue such a policy. The Biden administration is now weighing whether to move forward on a menthol ban or a nicotine reduction in all cigarettes—or both, the people familiar with the matter said.

The White House and the FDA didn’t immediately comment Monday.

The nicotine-reduction policy under consideration would lower the chemical in cigarettes to nonaddictive or minimally addictive levels, aiming to push millions of smokers to either quit or switch to less harmful alternatives such as nicotine gums, lozenges or e-cigarettes. A menthol ban, meanwhile, would aim to curb smoking initiation among young people, many of whom start with menthols. Both policies would take years to implement and would likely face legal challenges.

an FDA commissioner under the Trump administration, pursued both a menthol ban and a reduction of nicotine in cigarettes as part of a broader tobacco policy he proposed in 2017. But after he left the agency in 2019, both plans were shelved.

Nicotine itself doesn’t cause cancer, heart disease or lung disease, according to the FDA. But it hooks people on cigarettes, which are linked to 480,000 deaths in the U.S. each year.

shares fell more than 6% Monday afternoon on the news of the Biden administration’s deliberations.

“Any action that the FDA takes must be based on science and evidence and must consider the real-world consequences of such actions, including the growth of an illicit market and the impact on hundreds of thousands of jobs from the farm to local stores across the country,” an Altria spokesman said.

Research funded by the FDA and the National Institutes of Health has shown that when nicotine was nearly eliminated from cigarettes, smokers were more likely to quit or seek a nicotine fix from less harmful alternatives such as e-cigarettes or gum compared, with smokers who continued using cigarettes with normal nicotine levels.

Lowering nicotine in cigarettes has been a subject of discussion inside the FDA since the 1990s. It can be done in different ways, such as genetically modifying tobacco plants or stripping nicotine from the leaf in the manufacturing process. In 2009, the Tobacco Control Act authorized the FDA to mandate such a change, stipulating that the policy be based on scientific evidence.

A ban on menthols has similarly been in the FDA’s sights for years.

The Tobacco Control Act banned candy, fruit and spice flavorings in cigarettes because of their potential appeal to children, but it left unsettled the issue of menthol. The 2009 law said the FDA could prohibit menthols only if it could demonstrate that a ban was a net benefit to public health, taking into account potential unintended consequences such as an illicit market. The agency has been working on overcoming that hurdle since then.

The FDA concluded in 2013 that menthols are harder to quit and likely pose a greater health risk than regular cigarettes. The agency said use of the cigarettes was likely associated with increased smoking initiation by youth and young adults.

Menthol, a compound that occurs naturally in mint plants, has been added to cigarettes since the 1920s. It provides a cooling sensation in the mouth and throat, similar to that of a mentholated cough drop. Health officials have said that eases the throat irritation caused by cigarette smoke, making menthols more appealing to young people and those who have never smoked.

The tobacco industry has rejected the FDA’s findings on menthol. Menthols represent about a third of the 226 billion cigarettes sold annually in the country and are popular among teenage and African-American smokers, federal data show.

—Stephanie Armour and Andrew Restuccia contributed to this article.

Write to Jennifer Maloney at jennifer.maloney@wsj.com