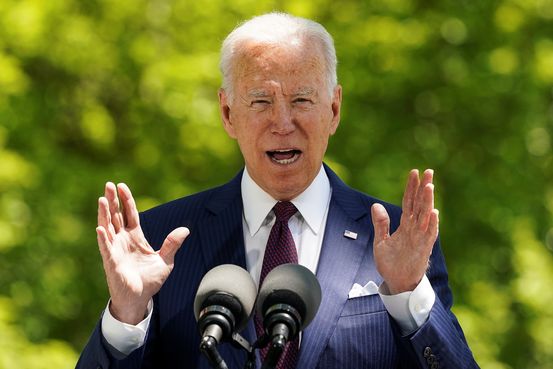 The proposal would require banks to report annual account inflows and outflows to the Internal Revenue Service. The requirement would also extend to peer-to-peer payment services such as Venmo but wouldn’t require individuals and businesses to report any additional information to the government, according to people familiar with the plan. Financial institutions already must report interest, dividend and investment income, and the IRS can get bank information during audits.

“Providing the IRS this information will help improve audit selection so it can better target its enforcement activity on the most suspect evaders, avoiding unnecessary (and costly) audits of ordinary taxpayers,” the Treasury Department said in a statement Wednesday.

The Biden plan, which includes new spending on child care, education and paid leave, relies on $700 billion in revenue the administration says would come from a significant expansion of the Internal Revenue Service. The information-reporting expansion of the plan, combined with some other efforts, would yield about $460 billion of the $700 billion in additional tax collection under the Biden IRS changes, the people said.

The proposal is expected to face pushback from the banking industry, which in the past has been critical of the costs associated with additional compliance burdens. The level of pushback will depend on how resource-intensive it will prove for banks to comply, said Dan Stipano, a former top attorney at the Office of the Comptroller of the Currency.

“If it is something that they already capture, it may not be such a big deal,” Mr. Stipano said. “But if not, I could see it adding significantly to their already considerable compliance costs and burdens.”

Former IRS officials and progressive groups have for years floated the idea of using bank-account information to narrow the tax gap—the IRS’s estimate of taxes it believes are owed but not paid. The gap neared $600 billion in 2020, according to estimates by former IRS Commissioner

who has advocated for a version of the plan, and others.

Still, compelling banks to share data on customer accounts, a move that requires congressional approval, would amount to just an initial step in narrowing the gap. Knowing how much money came into and out of an account doesn’t by itself tell the IRS whether there is unreported income. People can receive nontaxable gifts or spend money on deductible business expenses, for example.

The IRS would need to figure out a way to use the information to decide which business owners to audit and what questions to ask them. The plan also includes billions of dollars for technology and staffing so the IRS could digest and analyze that information.

“The jury is out on whether the IRS has the capacity to do this properly,” said Nina Olson, who was an in-house IRS watchdog from 2001 to 2019.

The change might have some effect on tax compliance even if the IRS can’t figure out how to use the information efficiently. That’s because taxpayers might start being less aggressive in their tax affairs once they know the IRS has a clearer view into their bank flows.

Write to Orla McCaffrey at orla.mccaffrey@wsj.com and Richard Rubin at richard.rubin@wsj.com

The Next Bet in Music: Artist Services