A majority of Americans support President Joe Biden’s handling of the economy, marking the first time his approval numbers have been on par with those enjoyed by Donald Trump in an area where the former president consistently received high marks from the public and on which he staked his political career. 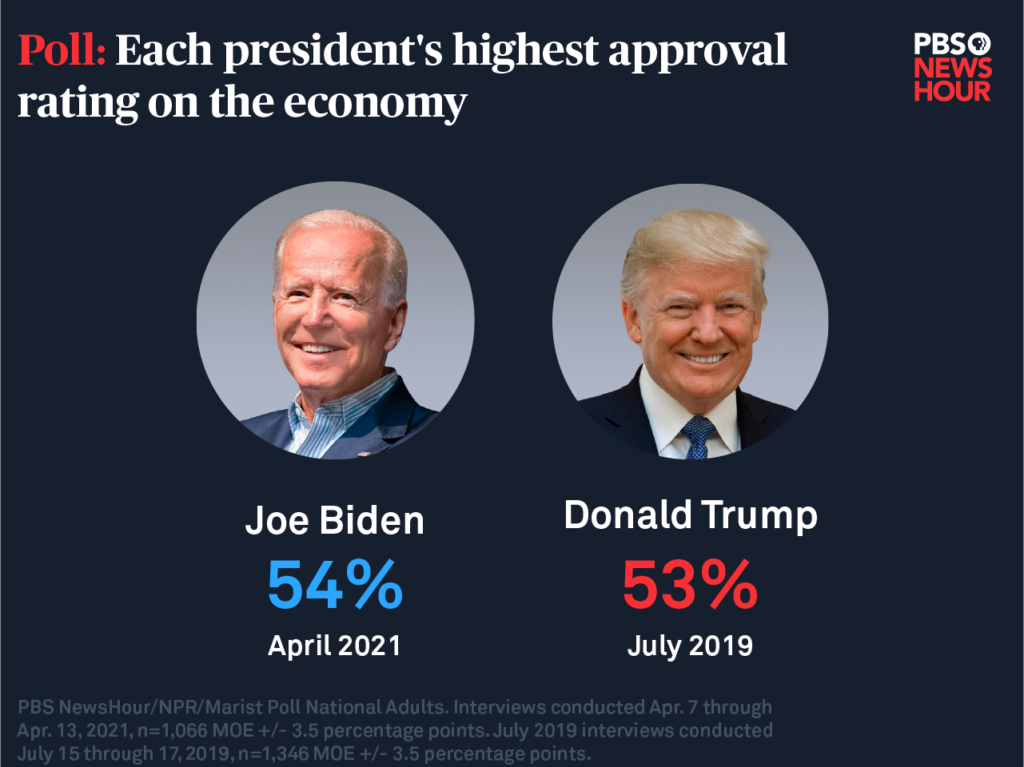 Trump’s handling of the economy topped out at 53 percent of Americans at its highpoint in July 2019, according to Marist polling data. In the most recent nationally representative poll, 1,266 U.S. adults were interviewed from April 7-13 and the margin of error is 3.3 percentage points.

Biden’s economic numbers are in line with his overall approval rating, with 53 percent of Americans saying they support the president’s job performance in his first few months in office. Another 39 percent disapprove of Biden’s performance.

While most Americans approve of the steps Biden has taken so far, many are still struggling amid the coronavirus pandemic, which drained much of the economic gain that Trump touted during his time in office. Millions of Americans remain out of work, and the jobless rate is still higher than pre-pandemic levels, according to the Bureau of Labor Statistics.

To jumpstart the economy, the Biden administration unveiled the American Jobs Plan on March 31. The $2.3 trillion proposal would invest money in the nation’s infrastructure, such as roads and airports, the electrical grid and water systems, and the White House estimates it would create millions of jobs.

A majority of Americans — 56 percent — support Biden’s plan to invest in the nation’s infrastructure, but he will still struggle to push the ambitious plan through a politically divided Congress, where Democrats have lean majorities in both the House and the Senate. Republicans are already putting up roadblocks, largely because of the scope of the plan and how Biden plans to fund it. 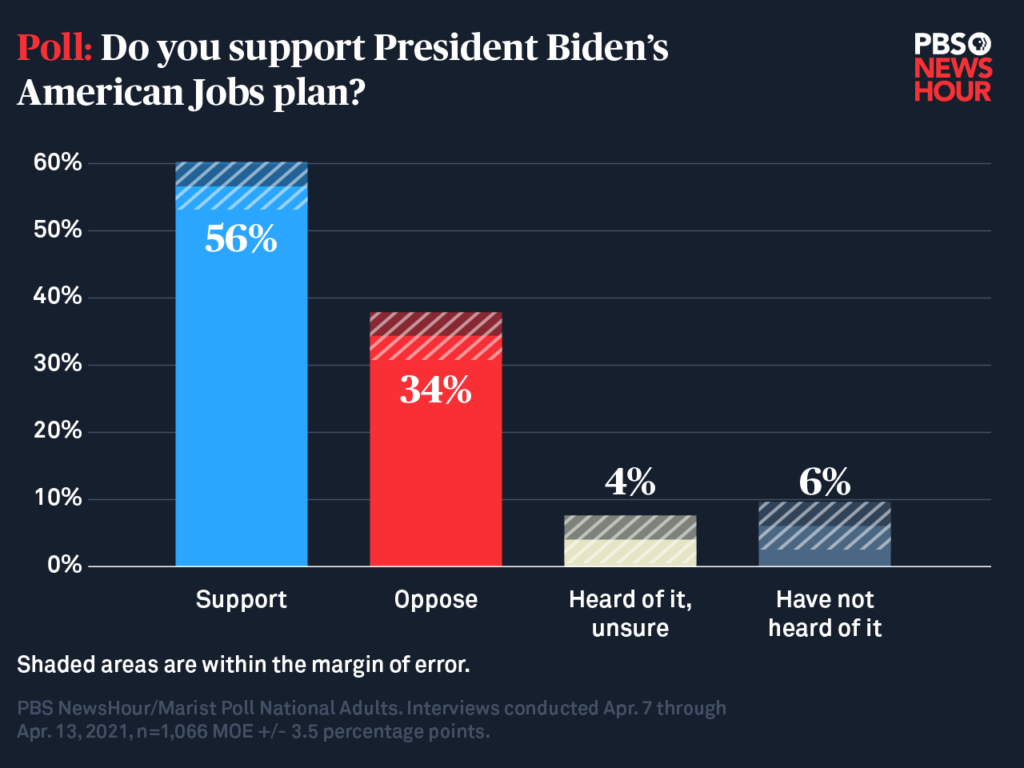 Biden has referred to the plan as a “once-in-a-generation investment in America,” comparing it in scale and impact to the creation of the Interstate Highway System in the 1950s and winning the Space Race a decade later. He called the American Jobs Plan “the single largest investment in American jobs since World War II.”

“Infrastructure is about meeting the needs of a nation and putting Americans to work,” he said. “Fifty years from now, when people look back, they’ll say this was the moment, together, that we won America’s future.”

In many places, the nation’s infrastructure has reached catastrophic levels of disrepair. Years after the water crisis in Flint, Michigan, first gained national attention, many residents still rely on bottled water because tap water is still dangerous to drink. And unsafe drinking water is a problem all across the country where lead pipes are still in use.

The pandemic has served to further highlight other national infrastructure issues. When schools were forced to close and teachers to launch remote learning, many children struggled to connect to virtual classrooms because they did not have adequate internet access.

A historic winter storm in February exposed deficiencies in the electrical grid for millions of residents in Texas and Mississippi, which left many without power for days and was linked to a number of deaths.

“Our infrastructure is lacking and holds us back from competing in the global economy,” said Stephanie Aaronson, vice president and director of the Economic Studies program at the Brookings Institution.

The Biden plan seeks to address all of the problems above. But it also expands upon how infrastructure has traditionally been defined, bringing under its umbrella essential home care workers and improving the resilience of infrastructure to the effects of climate change, which disproportionately hurt communities of color. The pandemic raised awareness that these changes are necessary, Aaronson said.

The plan the president set before Congress is “just so expansive,” said Michael Strain, an economist with the conservative American Enterprise Institute. Removing lead pipes is one thing, he said, but including in-home care for the elderly and people with disabilities is another.

“There are things the president is proposing that I think are great, and would be good to do. And there’s a lot in there that we need to take a harder and more critical look at,” he said.

The question of how to pay for these improvements has fueled much of the debate around infrastructure. Roughly two-thirds of Americans support increasing taxes on people who earn more than $400,000 a year, according to the Marist poll. That includes 90 percent of Democrats, 66 percent of independents and 32 percent of Republicans. Most U.S. adults — 63 percent — also approve of taxing at least 21 percent of earnings that American companies make in other countries.

But Americans were far more reluctant to voice their support for measures that would have them footing the bill for some of Biden’s proposed improvements. Only 28 percent of U.S. adults backed increasing the gas tax to help pay for the infrastructure plan — nearly 30 years have passed since the country last increased the gas tax — and 30 percent supported increasing usage fees, such as highway tolls. And 20 percent supported raising taxes on all Americans.

Americans often bristle at these taxes because they seem to violate a sense of fairness, especially in light of what is often perceived as generous corporate tax cuts, said Barbara Carvalho, who directs the Marist poll.

A large part of the debate among legislators in Congress is over how to pay for Biden’s ambitious plan, or whether to pay for all of it. But Republicans and Democrats alike recognize that the nation’s infrastructure is increasingly demanding attention and action, both for the immediate needs of Americans but also for the country’s ability to compete on the global stage.