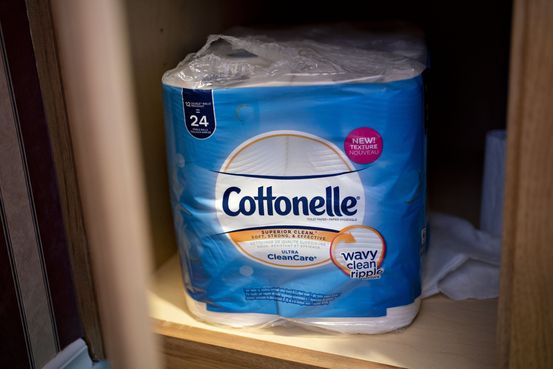 delivered its worst sales performance in at least a decade, hit by supply-chain disruptions, continued business shutdowns and fallout from last year’s toilet paper hoarding amid the pandemic.

The maker of Huggies diapers and Cottonelle toilet paper reported an 8% decline in organic sales, which strips out deals and currency moves, for the quarter ended March 31. Sales in its consumer-tissue segment, which includes toilet paper, Scott paper towels and Kleenex tissue, fell 14%.

It is a sharp reversal from 2020 when the world’s consumers, stuck at home and hyper focused on cleaning, drove a 6% increase in organic sales for the year as they loaded up on paper towels, cleaning products and other household staples. Consumer-tissue sales last year rose 14%.

“I am not pleased with the results,” Kimberly-Clark CEO

said in a call with analysts. He said that while the company expected slower consumer-tissue sales, the extent to which consumers stopped buying toilet paper came as a surprise.

Demand for toilet paper shot up in the outbreak’s initial weeks, doubling in the second week of March, and remained elevated throughout most of 2020. Americans spent more than $11 billion on toilet paper last year, up from $9 billion in a typical year, according to NielsenIQ. If the current pace holds, 2021 sales would be less than $9 billion.

That pullback came in addition to other issues, including severe weather in the South and soaring costs of raw materials and transportation as pandemic- and weather-related complications continue to hamper global supply chains.

Adding to the woes: After a bleak 2020 for Kimberly-Clark’s professional unit, which sells toilet paper, paper towels, napkins and other products to businesses, sales fell another 13% for the quarter as many offices, schools, restaurants and hotels remained either fully or partially closed.

Mr. Hsu said the company is cutting costs, overhauling marketing efforts and rolling out broader price increases as a way to recover sales and improve profitability. The company previously announced plans to increase prices on products in its baby- and child-care, adult-care and Scott bathroom tissue businesses starting in June. Those increases would be in the mid- to high-single digit percentage points and take effect in late June. Mr. Hsu said additional increases are likely.

Rival Procter & Gamble Co. also said this week that it will raise prices in response to rising commodity costs.

organic sales increased 4%, helped by a lineup with a greater variety of products, including beauty and grooming products, household cleaners and oral care products.

Kimberly-Clark logged first-quarter earnings of $1.72 a share in the latest quarter, a decline from $1.92 a share in the same period a year earlier. Net income attributable to the company was $584 million, compared with $660 million in last year’s first quarter.

—Matt Grossman contributed to this article.

Appeared in the April 24, 2021, print edition as ‘Kimberly-Clark Hit By Paper Sales Drop.’

Caitlyn Jenner says she will run for governor of California

Caitlyn Jenner says she will run for governor of California