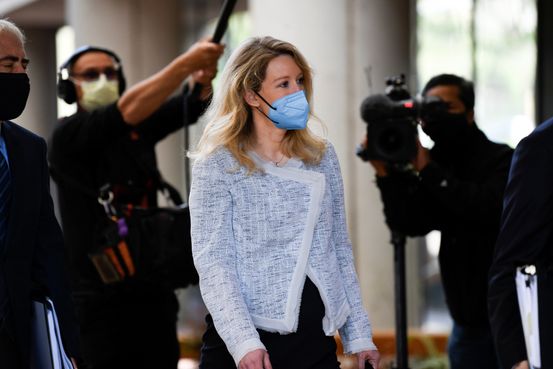 appeared in a federal courtroom in San Jose, Calif., Tuesday for the first time in more than a year, attending arguments between her lawyers and prosecutors over what evidence jurors can hear at her approaching criminal fraud trial.

Ms. Holmes faces criminal charges stemming from the failed blood-testing startup she launched as a Stanford University dropout in 2003 and ran until its dissolution in 2018. Prosecutors allege that she and former Chief Operating Officer Ramesh “Sunny” Balwani deceived investors and patients by promising the company’s blood-testing technology could do more than it actually could.

Attorneys for Ms. Holmes argued Tuesday that the U.S. attorney’s office for the Northern District of California had built a sweeping case on anecdotal evidence and urged a federal judge to restrict what prosecutors could present to a jury at a trial scheduled to begin in late August.

“This trial is going to be a sprawling mess of irrelevant, prejudicial evidence,”

Assistant U.S. Attorney John Bostic countered that the case wasn’t overly broad and that the indictment alleged Ms. Holmes “defrauded patients by saying tests were accurate and reliable when they weren’t—and she knew it.”

The trial has been delayed several times, first because of the coronavirus pandemic and most recently after Ms. Holmes told the court she was due to have a baby in July.

Ms. Holmes and Mr. Balwani, whose trial will be held separately after hers concludes, have each pleaded not guilty.

How do you foresee the Holmes trial unfolding? Join the conversation below.

set aside three days this week, starting Tuesday, for arguments on more than 20 motions over what jurors will be allowed to hear. The hearings are being held in person in a courtroom accessible to the public only by phone, after months of proceedings held virtually because of the pandemic.

Ms. Holmes’ lawyers argued Tuesday that prosecutors had no scientific proof that Theranos tests were erroneous, and that without it they shouldn’t be able to cherry-pick bad results from the millions that Theranos produced during the years it was testing actual patient blood.

Theranos billed itself as a company that could test for a variety of health conditions with blood drawn from a finger prick, but it also used conventional intravenous blood draws tested on other companies’ machines, Ms. Saharia said Tuesday.

Ms. Holmes is trying to block the government from calling patients and medical professionals as witnesses to talk about inaccurate test results they received from the company. Her lawyers argue there is no way to tell if a wrong result was because of Theranos technology or due to other factors, such as the person who drew the blood.

Ms. Saharia said the lack of scientific evidence from prosecutors had “led to a gigantic hole in its case.”

That hole could have been partially filled, her lawyers argued, with an internal database Theranos kept that recorded details about every test result.

The database is no longer accessible, and the reasons for that have been hotly contested by the two sides, including at Tuesday’s hearing. Government lawyers argued that even if they had the database, it didn’t have a data field to show whether a test result was inaccurate, so its loss wasn’t a critical flaw in building their case.

Presenting evidence from obstetricians, for instance, who had complaints over Theranos pregnancy tests is just one piece of what they’ll show jurors, Mr. Bostic said.

Other motions at issue this week challenge whether prosecutors can show jurors regulator reports finding issues with Theranos labs, information on Ms. Holmes’s wealth and a spreadsheet of text messages that the government said she and Mr. Balwani had exchanged.

Prosecutors are set to ask the judge to allow evidence of the consequences of Theranos’s alleged actions, including that the company received customer complaints that went ignored.

Judge Davila said he planned to give the lawyers his initial take on motions during the hearings, with a further analysis later submitted in writing.

In one early opinion given Tuesday, Judge Davila said he wouldn’t prevent Ms. Holmes from raising aspects of Silicon Valley culture as part of her defense. He ruled that she couldn’t argue that startup founders frequently exaggerate to attract money, but that only she was being prosecuted for that behavior.

Write to Sara Randazzo at sara.randazzo@wsj.com

The Collapse of Theranos

WSJ’s coverage of the blood-testing startup’s unraveling, selected by the editors:

Even the CEO of Zoom Says He Has Zoom Fatigue