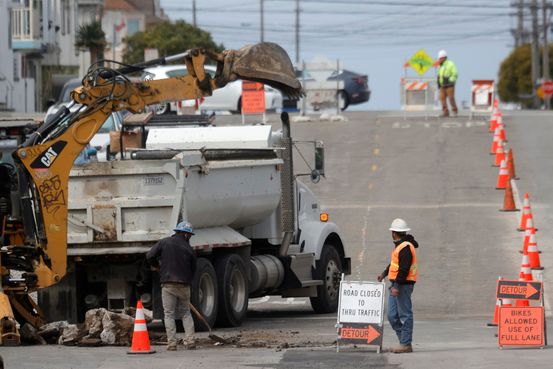 WASHINGTON—A group of Senate Republicans released the outline for a $568 billion infrastructure plan, putting out a GOP alternative to President Biden’s $2.3 trillion plan as lawmakers seek a bipartisan compromise on the issue.

The two-page Republican plan—which includes spending on roads, transit systems, and broadband internet over five years—doesn’t provide specifics on how it would cover the cost of the bill, a central issue in the talks. The GOP proposal calls for collecting user fees for electric vehicles and repurposing existing federal spending, while opposing Mr. Biden’s proposed tax increases on companies.

Of the $568 billion in the outline, $299 billion would go toward roads and bridges, an increase from the $115 billion the Biden administration’s plan proposes. The GOP plan also dedicates $61 billion to public transit systems, $20 billion to rail and $65 billion for broadband.

Overall, though, the GOP offer is a fraction of the size of Mr. Biden’s proposal, which will likely limit its support among Democrats. Mr.

said at a meeting with a bipartisan group of lawmakers this week that he wanted to see a Republican offer on infrastructure by mid-May.

The group of Senate Republicans, which included Sens.

(R., Wyo.), said they had sent the White House their offer earlier Thursday.

“I think that we see this as an offer that is on the table and deserves a response and I think we will get a response, and we look forward to that and we’re ready to get to work,” said Mrs. Capito, the top Republican on the Senate Environment and Public Works Committee. She later called the offer a “beginning document.”

Mr. Biden’s proposal includes $621 billion to modernize transportation infrastructure, $400 billion to help care for the aging and those with disabilities, $300 billion to boost the manufacturing industry, $213 billion on retrofitting and building affordable housing and $100 billion to expand broadband access, among other items. It would also raise the corporate tax rate to 28% from 21% and increase taxes on U.S. companies’ foreign earnings to cover the cost of the eight-year spending plan over 15 years.

Senate Republicans had criticized Mr. Biden’s plan as being too sprawling, and stretching the traditional definition of infrastructure. GOP lawmakers had been discussing a $600 billion to $800 billion plan in recent days, with the ultimate product coming below that range after a series of meetings.

“As you can see, it consists of actual, real infrastructure,” Mr. Toomey said of the GOP plan.

Sen. Bernie Sanders (I., Vt.) said the Republican plan fell far short of what was necessary. “It goes nowhere near what has to be done to rebuild our crumbling infrastructure and the funding is totally regressive and anti-working class,” he said.

Lawmakers on Capitol Hill are trying to determine whether they would be able to reach a bipartisan compromise on infrastructure, long an issue that Republicans and Democrats have said they could work together on. With narrow control of the House and Senate, Democrats have the ability to move forward with an infrastructure plan along party lines, though some in the party have sought to reach a bipartisan agreement first.

One possible avenue floated by some Democrats is for lawmakers to come together on a narrower infrastructure package before moving forward with a second, broader package along party lines. The White House is expected to soon roll out a second package focused on antipoverty and education proposals that could top $1 trillion.

Some moderate Democrats have previously said that they would be open to reviewing the Republican offer. A bipartisan group of lawmakers has held meetings recently to discuss the possibility of a compromise.

“When you throw out a number like $2 trillion or $800 billion, what’s really important is what is in there. You know, what are the details of those proposals and then ultimately how you’re going to pay for it,” Sen. Mark Kelly (D., Ariz.) said Wednesday.

The release of the Republican plan does little to settle the debate about how to pay for the package. The White House has said it is opposed to relying on user fees to pay for the infrastructure package, though some Democrats on Capitol Hill have said they are open to that idea.

Mrs. Capito said the GOP plan wouldn’t include raising the gas tax, instead floating the possibility of collecting a vehicle-miles-traveled tax that would collect revenue from electric vehicles.

“We’ve talked about that in committee, no commitments there, we’re basically just lining out our principles,” she said.

Republicans also maintained they would oppose the corporate tax increase the White House is seeking. Some Democrats have said they are hesitant about raising the corporate rate to 28%, with some expecting the party to ultimately rally around raising it to 25%.

The Best Gear for Frazzled Parents, According to an Expert