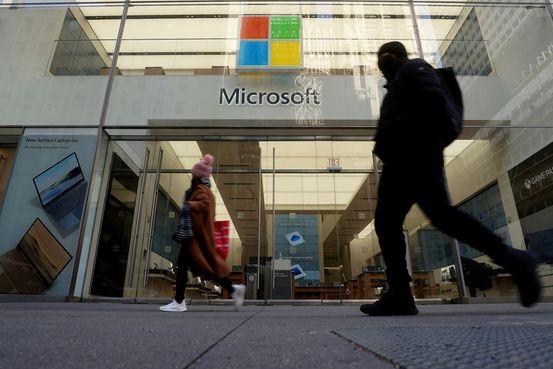 extended its pandemic-fueled run of strong quarterly earnings that have bolstered investor enthusiasm in the software giant, bringing the company near a $2 trillion valuation.

Microsoft has seen massive growth across its professional and consumer businesses with people stuck at home and remote work and distance education becoming the norm for many. That has driven rapid uptake of its cloud-computing services and supercharged the company’s videogaming sales. Microsoft’s stock is up around 50% over the past year, driving the company’s valuation to about $1.97 trillion, second only to

What do you find most meaningful in Microsoft’s quarterly report? Join the conversation below.

said in a statement.

The Redmond, Wash., company posted a 19% increase in its fiscal third-quarter sales to about $41.7 billion, generating net income of $15.5 billion for the January through March period. The results beat Wall Street expectations, according to FactSet.

Microsoft shares retreated around 3% in after-hours trading after a strong run-up in the stock ahead of earnings.

“Now there are worries about the sustainability of Microsoft post-pandemic,” said Rishi Jaluria, an analyst for investment research firm D.A. Davidson & Co.

The company’s videogaming activity has been particularly hot during the pandemic. Xbox content and services revenue increased 34% in the latest quarter aided by the recent release of two new consoles, Xbox Series X and S. Xbox hardware revenue more than tripled from the previous year.

Strong demand for cloud services late last year helped Microsoft reverse a trend of a gradually declining pace of growth. The company said sales linked to Azure cloud services advanced 50% in the most recent quarter, on par with the December quarter.

Growth in Azure, the collection of a global network of data centers and software tools Microsoft sells as a service, had been slowing before the pandemic hit as the business gained scale. Microsoft sees a return to that pattern as likely.

“We’re getting into the law of large numbers” on Azure’s growth, said Microsoft’s Ms. Vikström. “We expect over time that it’s going to decelerate as numbers get bigger.”

Microsoft also benefited from the broad strength in the advertising market. Its search advertising business was up 17%, and ad-spending also helped lift revenue at LinkedIn, the professional social-media network, by 25%.

Tech rival Alphabet Inc. on Tuesday reported a 34% jump in first-quarter sales from the year earlier, driven by a surge in digital ad spending.

Microsoft’s Ms. Hood said she expected “another strong quarter” for the three months ending in June. The company forecast $43.6 billion to $44.5 billion in sales in the three-month period, beating Wall Street expectations.

—For more WSJ Technology analysis, reviews, advice and headlines, sign up for our weekly newsletter.

Write to Aaron Tilley at aaron.tilley@wsj.com