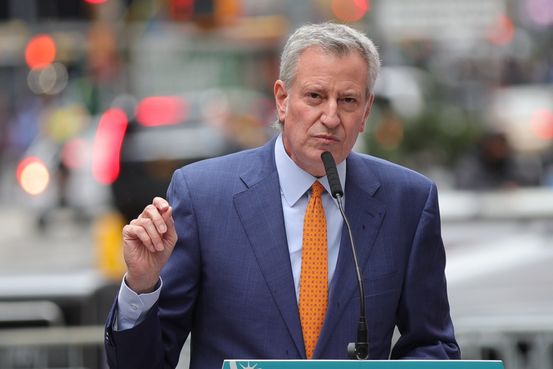 A boost in tax revenue and federal stimulus money will allow New York City to restore more than $10 billion in spending that it cut last year because of the Covid-19 pandemic, Mayor

The Democratic mayor revealed the city’s brighter financial outlook in his $98.6 billion budget proposal for the coming fiscal year, which begins July 1. He and the New York City Council approved an $88.19 billion budget last year as the city was struggling to stem the virus’s spread and faced high unemployment and business closures.

The focus of spending in Mr. de Blasio’s budget proposal is on the city’s pandemic recovery, including loans and rental assistance to small businesses and funding for a new workforce to clean up the city.

The budget proposal also provides $377 million to the city’s free preschool program for 3- and 4-year-olds. It also includes $50 million for a newly launched public-health corps, which is focused now on Covid-19 recovery but will in the future work to connect people to primary-care physicians and other health resources.

Under the mayor’s proposal, the city would expand a pilot program that dispatches mental-health experts instead of New York Police Department officers to some emergencies.

“This is what we’re focused on—a recovery that reaches every neighborhood, every New Yorker,” Mr. de Blasio said at a press conference Monday.

The new budget is one that “brings us back better, fairer, stronger,” he added.

The City Council has until June 30 to negotiate changes in the budget and approve it. Council Speaker

a Democrat, said he was happy that many of the council’s budget priorities were included. But he still had concerns about possible budget gaps after the coming fiscal year and wanted more funding for vulnerable communities, he said.

“We look forward to our upcoming budget hearings where we will continue to press the de Blasio administration on our priorities, and how we can work together to keep New York City the greatest city in the world,” he said.

City officials say they expect to collect $1.5 billion more in tax revenue than what they previously predicted in January.

“
‘This is what we’re focused on—a recovery that reaches every neighborhood, every New Yorker.’
”

The latest federal Covid-19 relief package provides $5.9 billion in direct aid and $7 billion in education funding to the city, according to the mayor’s office. The federal funding must be used by 2024. The state budget, which passed in April, gives the city more funding than last year and restores nearly all cuts and cost shifts from the pandemic.

More than 31,000 New York City residents have died from Covid-19. The pandemic and statewide shutdown measures put in place last spring to stop the virus’s spread led to the loss of nearly 878,000 jobs, according to city data. The city’s unemployment rate was 11.7% in March, according to the U.S. Bureau of Labor Statistics. It was 3.8% during the same time last year.

However, the city’s economy has shown signs of improvement in recent months, city officials said, as Covid-19 vaccinations increased and shutdown measures have eased. Between December 2020 and March 2021, the city saw an increase of 100,000 jobs, with the largest gains in hospitality and healthcare, the mayor said. City officials said they predict the city would gain 400,000 more jobs by the end of the year.

An insightful weekly view of how diversity is changing the landscape of business with new company policies, workplace trends and redefined missions.

The Citizens Budget Commission, an independent budget watchdog, said the city should set up annual savings programs for city agencies and decrease the size of the city’s current workforce.

“The savings program is anemic, relying mostly on nonrecurring savings that do nothing to increase efficiency,” Andrew Rein, the independent watchdog’s president, said.

Before Covid-19, the city reached a new peak of more than 327,000 full-time and full-time equivalent employees. By February 2021, the head count had shrunk to more than 312,000 positions because of retirements and a hiring freeze. Citizens Budget Commission recommends the city should aim for a workforce of 310,000.

However, new initiatives in the mayor’s budget proposal, including the expansion of free preschool programs and the City Cleanup Corps, will raise the predicted head count to 319,100.

Write to Katie Honan at Katie.Honan@wsj.com