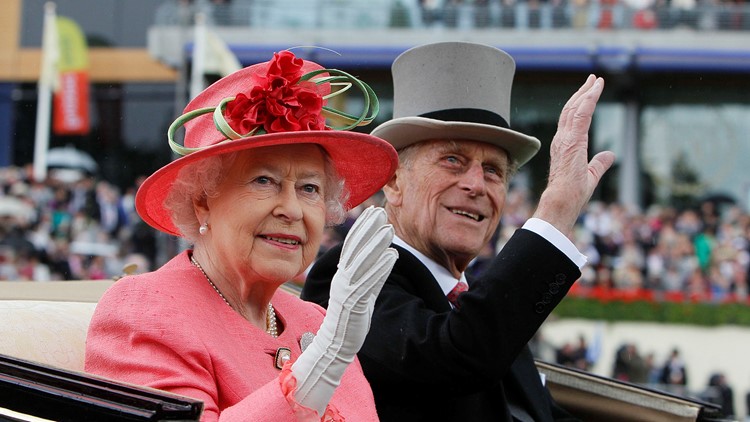 Philip’s funeral will take place Saturday at Windsor Castle, with attendance limited to 30 because of coronavirus restrictions.

LONDON, UK — Queen Elizabeth II has returned to royal duties, four days after the death of her husband, Prince Philip, as preparations stepped up on Wednesday for his ceremonial funeral on the weekend.

The 94-year-old British monarch attended a retirement ceremony for a senior royal official on Tuesday, according to the Court Circular, the official record of royal engagements.

The royal family is observing two weeks of mourning for Philip, who died Friday at the age of 99. The palace has said members of the royal family will “undertake engagements appropriate to the circumstances” during the mourning period.

Princess Eugenie, Philip’s granddaughter, paid tribute to her “dearest Grandpa” and promised to look after “Granny.”

The queen attended a ceremony at Windsor Castle for Lord Chamberlain Earl Peel, who has retired as the royal household’s most senior official. He oversaw arrangements for the funeral of Prince Philip, also known as the Duke of Edinburgh, until handing over to his successor days before the duke’s death.

The queen and Philip’s daughter, Princess Anne, made a public appearance on Wednesday, visiting young sailors at the Royal Yacht Squadron sailing club on the Isle of Wight off England’s south coast. Prince Philip was a Royal Navy veteran and keen sailor.

His funeral will take place Saturday at Windsor Castle, with attendance limited to 30 because of coronavirus restrictions.

Although it is a scaled-down service because of the pandemic, hundreds of servicemen and women from the Royal Navy, Royal Marines, Army and Royal Air Force will take part in the funeral procession, and Philip’s coffin will be borne to St. George’s Chapel at the castle on a specially adapted Land Rover, which he designed himself.

Military personnel rehearsed for the event Wednesday at Army Training Centre Pirbright, near London. One of four Royal Marines buglers who will play “The Last Post” at the service said it was an “honor and privilege” to perform the role.

Since Philip’s death his four children have all paid tribute to him, as have grandsons Prince William and Prince Harry.

Another grandchild, Eugenie, shared memories on Instagram of “learning how to cook, how to paint, what to read” with her “dearest Grandpa.”

“I remember laughing at your jokes and asking about your spectacular life and service in the navy,” wrote Eugenie, who is the younger daughter of Prince Andrew and Sarah, Duchess of York. “I remember incinerating the sausages and you swooping in to save the day. I remember your hands and your laugh and your favourite beer.”

“I will remember you in your children, your grandchildren and great grandchildren, she wrote. “Thank you for your dedication and love for us all and especially Granny, who we will look after for you.”

Philip is survived by the queen and their four children — Prince Charles, Princess Anne, Prince Andrew and Prince Edward — as well as eight grandchildren and nine great-grandchildren.

The great-grandchildren are William and Kate’s children, Prince George, Princess Charlotte and Prince Louis; Harry and Meghan’s son, Archie; Savannah and Isla, the daughters of Peter Phillips and his wife, Autumn; Mia and Lena, the daughters of Zara Phillips and her husband, Mike Tindall; and Eugenie’s son, August, with her husband, Jack Brooksbank.

Hundreds of Companies, CEOs Band Together on Voting Access

States Were Told They Can’t Use U.S. Covid-19 Aid to Cut Taxes. They Sued.

States Were Told They Can’t Use U.S. Covid-19 Aid to Cut Taxes. They Sued.