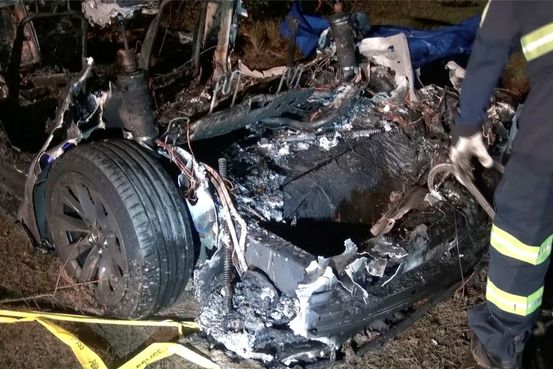 U.S. safety officials are investigating a fatal weekend crash involving a Tesla Inc. vehicle, adding to a series of probes into incidents involving the electric-vehicle maker.

Local authorities believe the Tesla Model S sedan was operating without anyone in the driver’s seat when it crashed into a tree Saturday night north of Houston, killing the two men inside.

The National Highway Traffic Safety Administration and the National Transportation Safety Board both said Monday that they were investigating the crash. NHTSA has enforcement authority over auto makers, while the NTSB issues safety recommendations. “We are actively engaged with local law enforcement and Tesla to learn more about the details of the crash and will take appropriate steps when we have more information,” NHTSA said in a written statement.

The NTSB said on Twitter that it was sending two people to investigate, adding that its probe would focus on the vehicle’s operation and the fire that local officials said engulfed the car for roughly four hours. Authorities on Monday were still investigating whether the vehicle’s advanced driver-assistance system, known as Autopilot, was engaged at the time of the crash.

said Monday on Twitter that “Data logs recovered so far show Autopilot was not enabled & this car did not purchase FSD,” in reference to an upgraded version of the driver-assistance system that the company calls “full self-driving.”

Tesla collects information on the use of its vehicles, including Autopilot, that can help to determine how they were operated.

Mr. Musk also said that for a driver to activate the basic version of the company’s driver-assistance feature a road must have lane lines, which he said aren’t present where the accident took place.

The company has previously said that Autopilot made Tesla vehicles safer than others. Tesla tells drivers using the feature to pay attention to the road and be prepared to take control of the vehicle.

(D., Conn.), who sits on the Commerce, Science and Transportation Committee, on Monday called for “comprehensive oversight” to prevent deaths tied to advanced driver-assistance systems. “Using Tesla’s driverless system—or any other—shouldn’t be a death risk,” he tweeted. “Advancements in driving technology must first & foremost be safe.” The senator has previously expressed concern about the safety of advanced driver-assistance technology.

The company on Monday also had to contend with a protester in China making a disputed claim about the safety of Tesla vehicles that drew attention across the Chinese internet. A woman climbed atop a Tesla Model 3 sedan at the Auto Shanghai expo and made allegations about faulty brakes on Tesla vehicles. Tesla said in a statement on Weibo that the protester was a Tesla customer whose father was involved in a February accident in which his Model 3 crashed into another vehicle. The company said the accident was due to excessive speed.

In the U.S., NHTSA has launched more than two dozen investigations into crashes involving Tesla vehicles, several of them in recent months. Two March crashes in Michigan drew federal probes, as did a February crash in Texas. None of those accidents was fatal.

the Harris County constable over Precinct 4, where the accident happened, has said he believes no one was behind the wheel at the time of the crash. One of the men killed in the accident was found in the front passenger’s seat and the other was in the back seat, he said.

Mr. Herman added that he didn’t believe a driver could have moved into the front passenger’s seat or back seat after the crash to try to escape the vehicle. He said the two individuals in the car were 69 and 59 years old. “Never say never, but I can tell you that’s not the direction our investigation is going,” he said.

Mr. Herman added that his staff had been in touch with NHTSA and the NTSB about the crash.

The scrutiny comes as Tesla is working through its largest-ever recall. The company agreed earlier this year to recall roughly 135,000 vehicles over touch-screen failures.

The prolonged fire after this weekend’s Tesla accident rekindles questions about the flammability of lithium-ion batteries that have become a concern for regulators and car makers as hybrid and electric vehicles using them become more numerous. If damaged, the high-voltage batteries used in electric vehicles can reignite even after firefighters extinguish a blaze because of energy that remains in some cells, according to the NTSB.

The agency recently warned that auto makers’ instructions to first responders about how to fight battery fires were lacking in some areas. The auto industry has said it is working to ensure safety of the vehicles.

Concerns about fires involving lithium-ion batteries and the challenge of extinguishing them have led to restrictions on the bulk air-shipment of such power cells and, at times, the transport of gadgets using them.

Write to Rebecca Elliott at rebecca.elliott@wsj.com