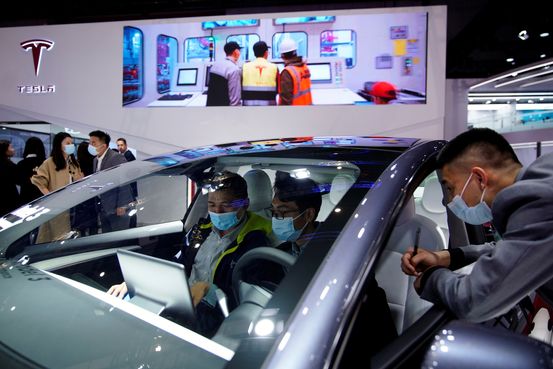 Tesla is saying sorry in China. It needs to face another longer-term challenge, too: Homegrown competitors are emerging.

The American electric-vehicle company issued a public apology Tuesday after an online backlash, which included state media and a Communist Party body, over its handling of a protest a day earlier at the Auto Shanghai expo. A protester claimed that faulty brakes on her family’s Model 3 sedan caused a crash that left her parents hospitalized.

The apology shows how China is becoming Tesla’s most important market and how it needs to tread carefully in the country as it has become a more prominent target. The company had its best month in China in March, selling 35,478 Model 3 and Model Y cars built at its Shanghai plant.

After being overtaken by Europe as the world’s largest EV market last year, China will likely take back its perch this year. There were 489,802 new-energy-vehicles sales, including plug-in hybrids, in the first three months of this year. That was nearly twice the level for the same period in 2019. The market has been rebounding strongly since the middle of last year when China put the pandemic mostly under control.

The boom is partly down to strong demand for a $4,400 hatchback called Hongguang Mini EV, made by a joint venture of

The car is cheap and practical enough to outsell the Model 3, but it is not Tesla’s direct competition in terms of performance or range. For now, Tesla is still ahead in the more premium segment.

But competition is popping up in higher-end EVs too. The Han sedan from

-backed BYD has been selling well since its launch last year. Car sales from startups like Nio and Xpeng hit records last quarter. And Chinese technology companies from search-engine giant Baidu to smartphone maker Xiaomi are jumping into the fray.

The continuing auto show in Shanghai—a rare car show with actual people —also points to increasing competition as car makers showcased their EV ambitions in the world’s biggest car market. Zhejiang Geely Holding Group, which owns Volvo Cars, unveiled its Zeekr 001 under its new EV brand. The sedan, priced slightly higher than Model 3, will arrive in China later this year. It could be a formidable challenger given Geely’s experience in China and car-making technology from Volvo.

Western car makers are also putting China at the center of their EV strategy.

announced ID.6, a new sport-utility vehicle that will be exclusively sold in China later this year.

will also launch its seven-seater EV EQB in the country later in 2021, ahead of Europe and the U.S.

Tesla is still ahead in China, but the road could become bumpier—and much more crowded.

Audio Could Perk Up Facebook’s Eyes and Ears