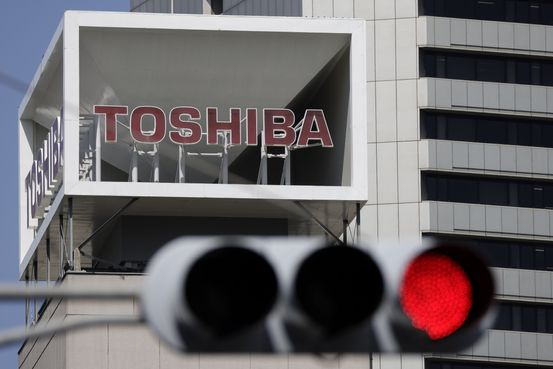 saying the proposal didn’t have enough detail to be considered and Toshiba preferred to remain a public company.

“As this preliminary proposal lacks the required information, the board has concluded it is not possible to evaluate it,” Toshiba said.

A representative of CVC declined to comment on Tuesday’s release. The private-equity firm has said it preferred to make a deal under nonhostile conditions and valued partnership.

Toshiba’s market capitalization briefly topped $20 billion earlier this month on the buyout talk, but fell back after initial suggestions by Toshiba leaders that the CVC proposal might not work out.

The stock closed down 1.1% Tuesday, before the company’s latest news release with a negative view on the CVC offer, to ¥4,350, equivalent to $40.12. That gave Toshiba a market capitalization equivalent to just over $18 billion.

Toshiba’s statement said CVC sent a letter Monday saying the private-equity firm would await guidance as to whether a privatization of Toshiba would suit the company’s management and board.

Toshiba said it didn’t agree with a suggestion by CVC that its status as a public company was detrimental to building corporate value. It said it was proud to have recovered its listing on the first section of the Tokyo Stock Exchange after financial problems several years ago and believed its current shareholder structure was suitable.

Toshiba said it would consider offers to take the company private, but any suitor would need to offer a detailed proposal.

Non-Japanese shareholders have held a dominant role at Toshiba since a share issue in 2017. The company has shed most of its consumer businesses, but Rakuten Securities strategist

“If Toshiba is to reject the acquisition offer, it needs to show which businesses it intends to keep or let go,” Mr. Kubota said.

who was a former chairman of CVC’s Japan unit, resigned last week under pressure from shareholders.

who had preceded Mr. Kurumatani in the top operating role, replaced him.