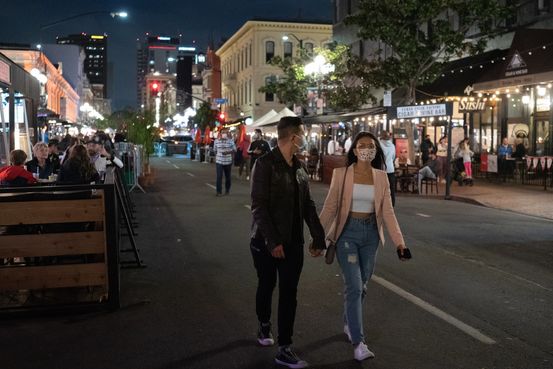 The U.S. economy grew at a 6.4% annual rate and approached its pre-pandemic size in the first three months of 2021, in what is shaping up to be a rapid, consumer-driven recovery.

Households, armed with hundreds of billions of dollars in federal stimulus money, drove the first-quarter surge in output by shelling out more for cars, bicycles, furniture and other big-ticket goods, the Commerce Department said on Thursday.

The recovery accelerated in the first quarter as more people received a Covid-19 vaccine, states and cities lifted business restrictions, and stimulus payments landed in bank accounts. Consumer confidence rose in April to the highest level in 14 months, the Conference Board said Tuesday.

“The U.S. economy is clearly in the nascent period of the recovery and headed for a robust expansion,” said Joseph Brusuelas, chief economist at RSM, a consulting firm.

The first-quarter increase followed a 4.3% increase in the fourth quarter of last year after rising at a 33.4% clip in the third. The rebound from a steep downturn last spring early in the pandemic was quicker than what many economists expected but still left the economy in a hole. For all of last year, the economy shrank by 2.4% when comparing fourth-quarter output to a year earlier—the first contraction since the 2007-09 recession.

Given the severity of last year’s downturn, the turnaround is one of the most remarkable on record. Just a year ago the pandemic pushed up the unemployment rate to a post-World War II high of 14.8%. The rate has since fallen to 6% as hiring accelerated. Worker filings for jobless benefits also have fallen to pandemic lows in recent weeks.

Congress has infused households and businesses with trillions of dollars in aid along with broad economic support from the Federal Reserve, a far more aggressive federal response than during previous economic crises. The upshot, economists say, is that the U.S. is leading the global economic recovery, a reversal of roles from the 2008 crisis when countries such as China and Brazil led the way while the U.S. recovery lagged behind.

This spring the government has sent most households $1,400 stimulus payments, on top of two prior stimulus efforts. That cash—and money that households have saved by not traveling and eating out during the pandemic—has enabled individuals to buy a range of goods and services.

To what degree do you think U.S. growth will surge? Join the conversation below.

Consumer spending, the biggest driver of economic demand in the U.S., likely soared in the first quarter. There are already signs of supply failing to keep up with demand.

“People have openly said, ‘This is my stimmy money—take it,’ ” Mr. Houser said. “But I think the demand is beyond that. It’s really a lifestyle thing right now. It’s something people can do safely during the pandemic.”

Meanwhile, the Federal Reserve has kept its benchmark interest rate near zero, a move that has helped push down interest rates on mortgages. Economists believe that policy has encouraged many Americans to buy homes. Last year, sales of previously owned homes reached a 14-year high, according to the National Association of Realtors, though the market has lost a bit of momentum this year amid tight supply.

Economists expect economic growth to pick up further in the second quarter and remain steady in the second half of the year. Many expect output to grow between 6% and 7% in 2021.

Such robust growth has risks, such as causing the economy to overheat and trigger a sharp rise in consumer prices. Fed officials noted the recent pickup in inflation in a rate-policy statement released on Wednesday, but they said they expect the increase to be temporary. The Fed expects inflation to rise above the central bank’s goal of averaging 2% this year, and recede to that level by the end of next year.

Some businesses are already facing pressure to raise prices. In San Diego, the restaurant Cork and Craft has had so much trouble finding cooks that it raised wages by $4 an hour to $18 this year, says co-owner Matthew DeLoach. Workers are being lured by other industries, including construction, for higher wages.

“Some of the people that had worked prior [to the pandemic] are not interested in coming back for anything less than $24,” Mr. DeLoach said. The restaurant is considering raising prices to cover the additional labor costs.

Write to Josh Mitchell at joshua.mitchell@wsj.com