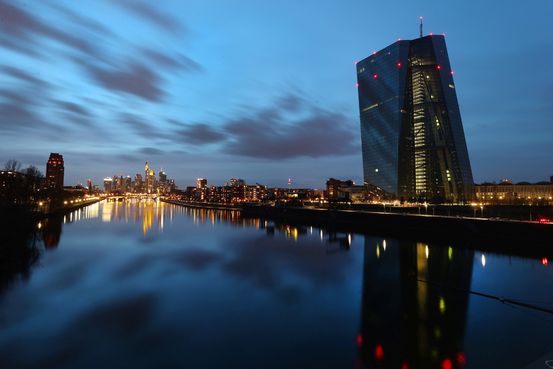 Demand for business loans in the eurozone fell and banks tightened credit standards in the first quarter of this year, a toxic combination that challenges the bloc’s slow economic recovery from the pandemic.

According to the European Central Bank’s latest lending survey released Tuesday, demand from companies for loans and credit lines fell for the third quarter in a row. The ECB said businesses seem to be postponing investments, as the pandemic triggers fresh lockdowns and other restrictions in many parts of Europe.

European companies tend to rely more heavily on bank lending than U.S. counterparts. That makes demand and supply of loans a key gauge of the health of the region’s economy, and one closely followed by the ECB when setting its monetary policy.

A pre-markets primer packed with news, trends and ideas. Plus, up-to-the-minute market data.

The dour survey weighed on financial markets Tuesday. An index of eurozone bank shares dropped by more than 2%. Yields on benchmark German 10-year bunds slipped to minus 0.25% from minus 0.24% a day earlier.

“When there is less appetite from the supply side with banks not wanting to expose themselves to the domestic economy, and from the demand side where the companies have no visibility on when the economy will open, that’s not a good recipe for an economy reliant on the banking system,” said Shaniel Ramjee, a multiasset fund manager at Pictet Asset Management.

The sluggish lending will be seen as a frustration for the ECB, which has unleashed massive stimulus into the economy through bond buying, cheap lending to banks and negative interest rates, as a way to counteract the effects of the pandemic. It accelerated its bond buying program in March, in part to lean against tightening credit conditions.

The ECB’s policy-making committee meets Thursday, where it isn’t expected to make changes. The tightening of credit conditions in the first quarter puts the eurozone further away from a quick recovery to pre-pandemic levels,

a senior economist at ING, said.

the ECB’s chief economist, has warned in the past about risks of a “mutually-reinforcing adverse loop,” under which banks see dwindling loan demand as a negative signal about the state of the economy, and companies see their concern confirmed by a tightening of borrowing conditions.

The central bank’s survey showed banks tightened their lending guidelines and approval criteria for new loans to businesses in the first quarter, although the tightening was less sharp than in the previous two quarters. Actual terms set on approved loans remained unchanged from the fourth quarter. The ECB said margins on average loans narrowed because of competition among lenders, although margins on riskier loans widened.

For the second quarter, banks expect a similar tightening of credit standards, while demand is expected to increase as companies struggle to pay bills during renewed lockdowns, the ECB said.

“Risk perceptions related to the deterioration in the general economic and firm-specific situation became considerably smaller but continued to be the main factor contributing to the tightening of credit standards on loans to firms,” the ECB said.

—Anna Hirtenstein contributed to this article.