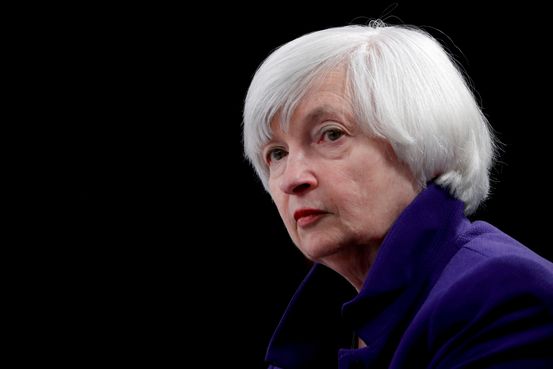 *At WSJ CEO Council, Yellen Says She Is Not Predicting or Recommending Higher Interest Rates

*Yellen: Biden Investment Spending Will Be Phased In Gradually Over Time

*Yellen: I Don’t See Rescue Package as Overheating the Economy

(Article below will update)

said Tuesday that it is possible the Federal Reserve may have to raise interest rates to keep the economy from overheating if the Biden administration’s spending plans are enacted.

President Biden has proposed roughly $4 trillion of new spending on infrastructure and social programs over the next decade, including funding for roads and bridges, research and development, affordable child care and paid family leave.

“It may be that interest rates will have to rise somewhat to make sure that our economy doesn’t overheat, even though the additional spending is relatively small relative to the size of the economy,” she said in a prerecorded interview at the Atlantic’s Future Economy Summit.

The remarks come amid recent signs that inflation is picking up. The Labor Department’s consumer-price index jumped 2.6% in the year ended in March, compared with a 1.7% rise in February. The Fed’s 2% inflation goal is linked to a different measure that tends to run a bit lower.

reiterated last week that the central bank isn’t worried about a persistent rise in inflation and that he expects that price increases over the coming months will be transitory.

“During this time of reopening, we are likely to see some upward pressure on prices,” Mr. Powell said at a press conference following the Fed’s policy meeting last week. “But those pressures are likely to be temporary as they are associated with the reopening process.”

Despite an improving economic outlook, most Fed officials expected to maintain ultralow interest rates through 2023, according to projections submitted at their March policy meeting. Just seven of 18 policy makers anticipated lifting rates in 2022 or 2023.

Stocks remained lower after Ms. Yellen’s comments. In recent trading, the yield on the benchmark 10-year U.S. Treasury note was 1.580%, according to Tradeweb, down from 1.606% Monday. Yields on shorter-term Treasurys, which are especially sensitive to changes in monetary policy, were also little changed—suggesting the remarks had little impact on investors’ interest-rate expectations.

One factor behind the market’s muted response: current yields indicate investors already expect the central bank to raise interest rates within the next couple of years—partly, investors and analyst say, due to optimism about the economic rebound and partly due to skepticism that the Fed will be as patient in tightening monetary policy as officials have signaled. Ms. Yellen also only said that rates may have to rise, not that they would definitely need to.

The message was that “rates may need to be slightly higher if the economy overheats, so I don’t think that was a major change from the outlook,” said Larry Milstein, head of government and agency trading at R.W. Pressprich & Co.

Ms. Yellen, who previously served as chairwoman of the central bank, said Tuesday the administration’s spending plans would involve some reallocation of resources within the economy, which “could cause some very modest increase in interest rates.”

But she emphasized that the investments, such as worker training, free community college and more funding for research and development, are needed to make the U.S. economy competitive and more productive.

“I think that our economy will grow faster because of them,” she added.

told reporters Tuesday afternoon that the president certainly agrees with his Treasury secretary and that the White House is keeping a close eye on price pressures.

“We also take inflationary risks incredibly seriously, and our economic experts have conveyed that they think this would be temporary and that the benefits far outweigh the concern,” she said.

“
‘I don’t believe that inflation will be an issue, but if it becomes an issue, we have tools to address it.’
”

Some economists, including former Treasury Secretary

have warned that a burst of federal spending this year stemming from the $1.9 trillion Covid-19 relief package enacted in March could prompt unwelcome inflation.

In an interview Sunday on NBC’s “Meet the Press,” Ms. Yellen played down concerns that Mr. Biden’s two new economic plans—one focused on infrastructure spending and another on families—would spur uncontrolled inflation. The spending, while large, would be spread out evenly over eight to 10 years, she said, “so the boost to demand is moderate.” The Biden administration has also proposed tax increases on corporations and the wealthy that officials say would pay for the plans over 15 years.

“I don’t believe that inflation will be an issue, but if it becomes an issue, we have tools to address it,” she said on NBC.

Ms. Yellen’s remarks were unusual because White House officials typically refrain from commenting on interest-rate policy. That was the norm for decades, starting in the Clinton administration, until President Trump began weighing in on the Fed’s actions and urging Mr. Powell to cut rates before the pandemic.

“Of all people, Secretary Yellen certainly understands that independence and the role of the Federal Reserve,” Ms. Psaki said. “I think she was simply answering a question and conveying how we balance decision making here.”

Ms. Yellen appeared to be addressing the mechanics of interest rates and what she believed is likely to happen, not offering a critique of Fed policies, said

an assistant professor at the University of Pennsylvania’s Wharton School who has studied Fed independence. In that regard, her remarks weren’t unusual for a Treasury secretary, he said.

But her comments could rankle some Democrats who are at odds over whether the U.S. is close to a point when rising debt and concerns about inflation might prompt higher rates, he said.

“Secretary Yellen’s statement—even to acknowledge that threshold exists, or that it is looming—risks taking sides in a debate where she undoubtedly has strong views but that strategically the Biden administration may want to avoid,” Mr. Conti-Brown said.

—Alex Leary and Sam Goldfarb contributed to this article.

Write to Kate Davidson at kate.davidson@wsj.com

Ethiopia ‘at a crossroads’ amid spiraling ethnic conflict